Positive news and results keep coming in for the Badminton enthusiasts, players, coaches and community in Malta. This time with wins from the Mixed Doubles couple Sadowski/De Gaetano in the Bulgarian International and Sam Cassar in the Slovak U17 International. 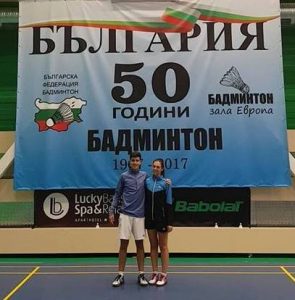 Fiorella Marie Sadowski and Nigel De Gaetano, under the guidance of Elite Squad Coach Martin Farrugia, managed to qualify to the main round of the Babolat Bulgarian International after beating Vasil Tsonev and Irena Atanasova 21-15, 21-19 on their home soil.  In the main draw they gave a very good challenge to a strong Austrian pair Phillip Drexler and Carina Mainke and only lost 18-21 and 17-21 in a 25 minute match at the “Europe” Sports Hall in Sofia, Bulgaria. In the same tournament all Maltese players managed to achieve positive and encouraging results. In the Men’s Singles both Nigel De Gaetano and Matthew Abela were eliminated in the first round, De Gaetano against the strong Bulgarian Ivan Panev 10-21, 14-21 and Abela against the Swedish Nils Ihse 17-21,13-21. In the Men’s Doubles, De Gaetano and Abela were paired together and had a very difficult draw and lost against a strong Indian pair Arun George and Sanyam Shukla 9-21, 12-21, who ended up dominating the doubles category. Abela was paired in the Mixed Doubles with the Portuguese Mariana Liete who lost in 2 games 10-21, 20-22. Sadowski also played the Singles and lost against the Armenian Lilit Poghosyan 8-21 and 7-21 and was paired with the Italian Giulia Fiorito and lost against a strong Swedish pair Olivia Hellman and Althea Ljungqvist 10-21, 16-21. 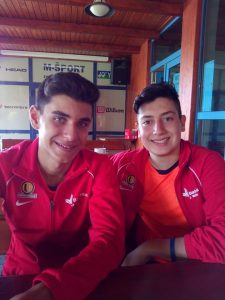 In the U17 Slovak International Sam Cassar managed to get home a win against young Czech player Vratislav Erhart 21-13 and 21-19 in a 28 minute match. Cassar, accompanied by his coach Edmond Abela was then defeated in the second round in a hard fought 3-games match against the Slovak Jaka Ivancic 13-21, 21-18 and 14-21. Maltese other young player Mark Abela lost in his first round against Ukraine’s Yehven Kobzar, 17-21, 16-21. In the Boys’ Doubles Abela/Cassar were eliminated in the first round against Karol Budny/Mikolaj Piorkowski 13-21,22-24. As the score indicates, Abela and Cassar gave their all in the second game only losing the game 24-22 in a 46 minute match.

Badminton Malta is very happy with the overall performance of the Maltese players and looks forward for more opportunities to get more wins to the Maltese Sports family and to the Badminton Malta community. All these positive results augur well to the future of local badminton participation in international events.