All England Winner to coach at Badminton Malta Academy

Talbot has a vast experience in the badminton field: Silver Medal in World Championships in XD, Winner of the All England Championships for three times and many other successes such as in the Commonwealth games. Now Talbot is eager to pass his vast knowledge on the game to our players to keep improving the badminton level in Malta. Coach Derek was presented yesterday to the Badminton Malta Academy players who were very enthusiastic with the new addition. 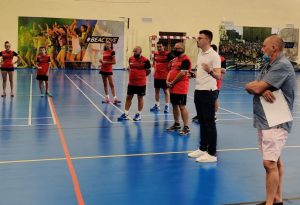 Owen Grech, Badminton Malta president expressed his satisfaction and honour to work with such a successful Badminton star and he is sure that Talbot will be a great influence and inspiration to all players.