Sam Cassar and Francesca Clark managed to stand on the podium after reaching Semi-Finals in the Mixed Doubles category at the Yonex Israel Open 2022. More wins in the pocket of the Maltese players make this another successful tournament for the Badminton Malta National Academy athletes. 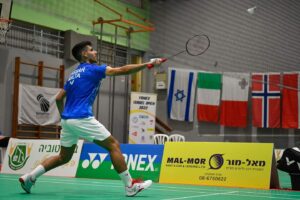 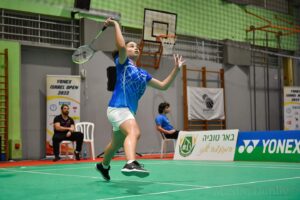 10 players from the Badminton Malta National Academy travelled to the Israel Open 2022 held between the 27th and 29th of October together with coaches Matthew Haynes and Patrick Cassar.

First on court was Isaac Ellul making his Men’s Singles debut at senior international level in the qualification rounds unfortunately losing out to Ofir Belenki (ISR) 14-21, 11-21.
In the Mixed Doubles main draw round of 16 both new pairings of Isaac & Lauren Azzopardi and Matthew Galea & Ann-Marie Bezzina lost in straight sets against more established Israel pairings. While in the other two games Sam Cassar & Francesca Clark and Mark Abela & Michaela Ellul both won their games also against Israel pairings 21-19, 21-17 & 21-19, 21-16 respectively to progress into the quarter-finals.

The singles main draw events were the next to be contested, Michaela Ellul and Francesca Clark both lost in the round of 32 in straight sets against Pissi (CYP) and Lurie (ISR) who also dispatched Lauren Azzopardi in the round of 16 after her bye through the first round. Ann-Marie lost out to 2nd seed Pelupessy (SWI) while Bergelson (ISR) worked her way past both Elenia Haber in the round of 32 and then Sarah Azzopardi in the last 16. In the Men’s Singles Sam Cassar won his match in straight sets 21-16, 21-14 against Shawn Grinblat (ISR) before losing out in the last 16 to 8th seed May Bar Netzer (ISR) 21-13, 21-12. Matthew Galea started his debut on the international scene with a mammoth 49 minute match against SILUK (ISR) unfortunately coming out on the wrong end after fighting back in the 2nd game from 20-13 down to win 25-23, final score finished 22-24, 23-25, 19-21.

Day 2 was the quarter finals with Malta having 5 matches throughout the morning. First on was the mixed doubles with Mark & Michaela facing the number 2 seeds from Switzerland where they gave their all but were outclassed 21-5, 21-10 although putting together many good spells throughout the games. On the adjacent court was Sam & Francesca facing the Israel pair who knocked out their fellow teammates the day before, after a close game with both pairings trying to get a hold of the game it was the Maltese pairing that took the first set 22-20 and then powered through to take the second 21-7 and book a place in the semi-finals. Francesca & Michaela making a debut pairing at this level event saw themselves up against the Swiss 1st seeds who were just too quick and powerful and won in two sets. Mark & Sam followed on from this match court against the 2nd seeds from Israel, a close back-and-forth encounter with just a few easy points or mistakes making the ultimate difference as they fell behind 18-21, 23-21. The final match of the morning quarterfinals session saw Elenia & Ann-Marie lose out to the same strong Czech pairing that beat the Azzopardi’s the day before.

The final match of the Maltese tournament in Israel would be a Mixed Doubles Semi Final against the 1st seeds from Switzerland. After a slow start the Maltese pairing started to find some control into the game and in both sets played some well-fought points, a few unlucky shots that didn’t quite fall their way saw the stronger Swiss pairing win 21-7, 21-8.

Overall some very good results and performances from the players, many of the players here making debuts at this senior level of competition and will take valuable experience and development from this event and take this into the next competition for most will be the Future Series being held in Malta (Cottonera) between the 8-11th December 2022.