My experience at the ‘All England 2019’ – Rebecca Spiteri

Badminton Europe Confederation held a competition lasting about 9 months granting the person
who promoted their posts on social media the most, a trip to the All England Competition held in
Birmingham 2019.

I decided to go for it and it turned out to be more than I expected because apart from winning some
monthly gifts and going to the All England Championships, the Voicestorm application helped me to
stay up to date with all the tournaments going on. It also helped me in keeping up with the results of
some of my favourite players which include Tai Tzu Ying (Chinese Taipei) and Viktor Axelsen
(Denmark).

After months of constantly sharing and trying my best to stay on top of the ranking, BEC messaged
me saying I won the competition- it was a very overwhelming and rewarding moment- I can’t put it
into words really.

Fast forwarding 6 months of preparations and planning, my boyfriend Diego and I were on a plane to Birmingham-
it was a first for both of us to go to an international tournament as important and as high-levelled as
this and be able to watch our favourite players in person rather than on our laptops at home.

Honestly, there is no way to explain that feeling when we stepped into the arena. It’s like getting
into a portal to another realm- in this case a realm of shuttlecocks and rackets. I had been planning
for months with Rasmus Bech (BEC official) and I could not believe that it was there, right in front of
me- that gigantic arena with 2 courts and I was fortunate enough to be able to watch high- level
badminton for 3 days (quarter-finals, semi-finals and finals). 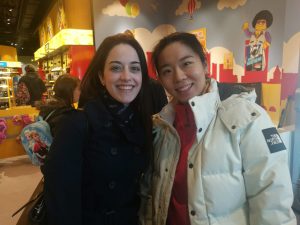 Apart from that, Diego and I had the honour to meet Jia Yifan (China) who had just won the final of
ladies doubles with her partner Chen Qingchen (China). Funnily enough, we met Jia Yifan in a Lego
shop as we were walking out of the arena.

The whole experience was very entertaining and it was a ‘Badminton lecture’ so to say, learning
from the best teachers in the world- the players themselves. The whole experience was
unbelievable- I couldn’t believe my eyes when I was in the arena seeing my favourite players off the
screen and celebrating with Diego the sport we both love.

I could never thank Badminton Europe enough for this amazing opportunity and their tremendous
generosity for sending me and Diego to the All England and for all the amazing gifts sent along the
way. It was such an amazing experience, one that I cannot put into words but one that I will treasure
forever. 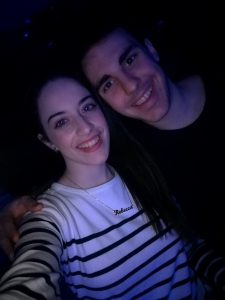