2016 in Review: A Year of Success at all Levels

2016 will be a year to remember for all Badminton Malta members, coaches, players, officials, administrators and their families. It was a huge experience at all levels and will serve as a springboard for the upcoming years. A successful year happens, thanks to the synergy and enthusiasm of a lot of people.

An encouraging and fruitful year for the youth sector at Badminton Malta. New opportunities, new experiences and satisfactory results make the future look bright for local Badminton. Apart from the various successes young players managed to achieve in local competitions, it was surely a successful year for the young Maltese badders internationally. The first quarter of the year saw the Maltese youngsters battling against top level world badminton players in the ISF Badminton World Championships, which were organised in Malta during the month of March. We have seen badminton giant countries like China, Chinese Taipei, India, Germany, France and Spain amongst many others and this was a huge challenge for our young players to prepare for. Months of intensive training boiled down to the weekend we were all waiting for!

In the boys’ competition team Malta, led by Coaches Edmond Abela and 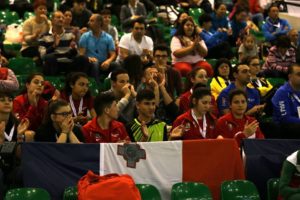 George Camilleri managed to finish third in the group which was won by the badminton superpower Chinese Taipei followed by Portugal. Malta Boys’ team, comprising of Matthew Abela, Nigel Degaetano, Sam Cassar, Mark Abela and Matthew Galea (who was injured for the games),  started with a good win on Scotland 4-1. Although losing all matches to Chinese Taipei, our boys managed to give Taipei players a hard time especially in the Boys’ Doubles matches. We have seen hard fought rallies, aggressive play and most of all huge enthusiasm by the Malta side. The final group game was lost to Portugal 1-4 where we have seen another win by the Boys’ Doubles duo Matthew Abela and Nigel Degaetano, who proved they can their doubles strength by beating the Portuguese pair. In the final stages, Malta Boys’ Team managed to win almost all of the Doubles’ games and one match against Belgium Flanders. 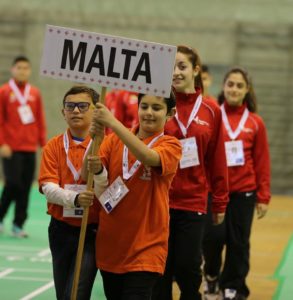 In the girls’ event, we had a very similar outcome managing to follow closely Greece and Bulgaria at the top of the table. The Maltese team, made up of Sarah Fava, Yanika Polidano, Cheryl Gilford, Michaela Ellul and Rebecca Spiteri, led by coaches Patrick Cassar and Aldo Polidano had a dream start by beating the French team 5-0. They then lost the following two matches against Bulgaria and Greece with an identical score placing third in the Group Stage. Winning against the Brazilian side 5-0 and then losing to Spain and Belgium Flanders with the identical score of 4-1, Malta has again showed it potential in the doubles category whereas in the first match Sarah Fava and Yanika Polidano overcame the Spanish opponents in a very close match 21-19 and 21-17 and in the following match Michaela Ellul and Cheryl Gilford managed to win against the Belgian couple. 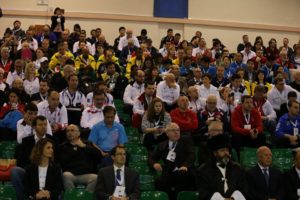 And what a great tournament it has been! From the competitive side, Badminton Malta has been very satisfied with the overall performance of the team. From the organisational perspective, this was one of the biggest challenges that Badminton Malta has ever faced. This tournament, which was organised together with the Malta School Sports Federation, hosted 20 countries and over 230 players who played in 2 venues on 16 courts. This tournament was possible thanks to a decision Badminton Malta took to invest in high quality equipment, with the assistance of SportMalta, which was used for this tournament and also created the possibility to host other important tournaments in our country. This tournament was all possible thanks to the unfailing assistance of  SportMalta, Malta Olympic Committee, sponsors, volunteers, officials and all our families. This event has been confirmed as a very successful event, by eventually going on to winning the International Event of the Year at the 2016 SportMalta Awards. 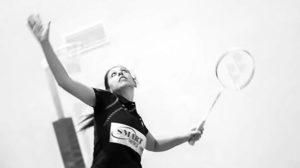 The ISF Badminton World Championship was not the only International participation and achievement by the Maltese players. 2016 turned out to be a very successful one in this matter. Fiorella Marie Sadowski was engaged with a Serie A Team Alba Shuttles to play in the top Italian League. Sadowski was played in all matches and had a good performance overall. She has also took part in the 2016 European Championships in France She took part in the Austrian Open together with Owen Grech and in the Italian International. 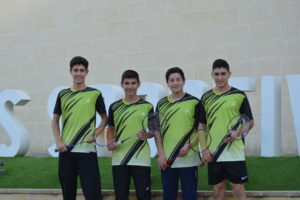 In the Junior scene we had several International successes where we have seen Sam Cassar and Mark Abela winning the Youth International Tournament U15 Boys’ Doubles Tournament in Merano with the same Cassar placing second in the Boys’ Singles. Nigel Degeatano and Matthew Abela managed to make it to the finals in the Boys’ Double U19 and Abela placed second in the Boys’ Singles U17. Later on in the year, Matthew Abela, Nigel Degeatano Sam Cassar and Mark Abela took part in other several Badminton Europe Circuit Tournaments in the Czech Republic and Slovakia and in December the same players took part in the Carlton Youth International Tournament in Holland again bringing home positive results with Mark Abela and Sam Cassar placing third in the U17 Boys’ Doubles, Nigel Degeatano making it to the Quarter Final of the Tournament after beating the competition’s number 2 seed and Nigel Degaetano and Matthew Abela won the U19 Doubles Friendly Tournament. 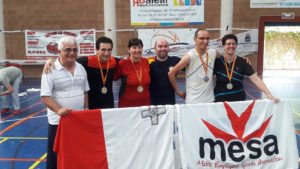 Malta has also taken part and managed to bring home positive result in the World Employees Championships where our Masters Team (over 40) managed to achieve second place, hence bringing home a silver medal. The team was made up of Kenneth Vella, Stephen Ferrante, Edmond Abela, Jo’Anne Cassar and Catherine Dimech and managed to top Group A and then advance to the final! 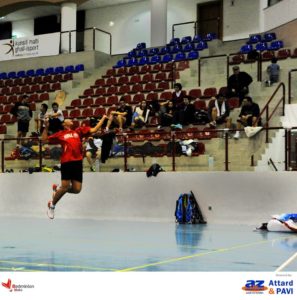 Apart from competitions, Maltese players also took part in several development opportunities to continue improving the local Badminton game. Kyle Sciberras is currently experience training in a professional setup in Denmark with a Danish club working hard to continue developing and taking part in various international competitions. Experienced players together with younger players took part in several Training Camps across Europe, developing further the level of Badminton in Malta. Later on this year, Badminton Europe has also launched an initiative to create a Centre of Badminton Excellence and Matthew Abela has participated in a Pre-Selection camp in Slovenia to hope for a place in the same Centre.

Locally we had numerous competitions with the climax being reached in the 45th Edition of the Malta National Championships. Matthew Abela and Fiorella Marie Sadowski won the Men’s and Women’s Singles Titles, Nigel Degaetano and Stephen Ferrante and Sarah Fava and Dominique Francica were triumphant in the Doubles Categories with Stefan Salomone and Klara O’Berg managed to grab the Mixed Doubles title. Other than the National Championships we have also assisted to other very exciting matches in all categories in the newly introduced Ranking Tournaments. 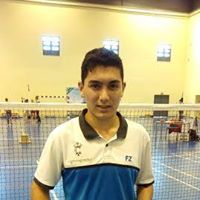 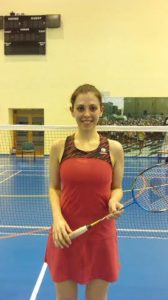 All in all, 2016 was a blast for Maltese Badminton and Badminton Malta is working hard to continue building on all the successes in different aspects. Badminton Malta would like to thank everyone who made this dream year possible with a lot of hard work, patience, support and enthusiasm.