Francesca Clark stands out at the Badminton Malta National Championships 2022 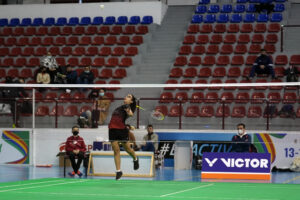 Badminton Malta national finals day kicked off with the Women’s Singles between last year’s winner Francesca Clark and Michaela Ellul. A little nervy start from both players with  the scores moving point for point to 3-2 before Francesca put together a run of a few points to extend the lead to the break 11-2. Francesca started picking up a few points after the break before a short fight back from Michaela as points were exchanged, Francesca was able to keep control of the pattern of play and continue to push to a 21-8 win in the 1st set. Michaela started the 2nd set the strongest, pulling to a 5-2 lead before Francesca could settle and work her way back to 6-6 a few forced errors by Michaela saw her fall slightly behind to an 11-9 deficit at the break. After the interval Francesca continued to pick up more points with Michaela only able to stop her progress with single points moving ahead to 15-11, again Francesca took the advantage and forced Michaela into some errors eventually taking the 2nd game 21-13. 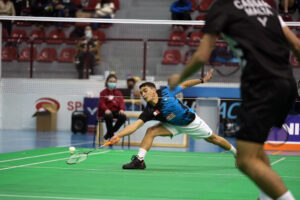 Next up in a repeat of last year’s Men’s singles final will see Matthew Abela take on Samuel Cassar. Sam started the quickest, rushing to a 4 point lead before Matthew started to get into the game a slight fight back to 8-3 down continued to be cut back to 9-10 before Sam took the interval 11-9. After the break Matthew put together a few well built points accompanied by some unforced errors from Sam as he swung the game to a 16-14 lead, from here the match played point for point until Sam managed to tie the game at 18 all and again at 20 all, both players had chances to win the game with the eventual winning coming from a mistake at the net from Sam in the games longest rally. Set 1 to Matthew Abela 24-22. Sam started the second as he did the first working his way to an early 6-0 lead even with some resistance from Matt this wasn’t enough to close the gap and this remained the same into the first interval as he kept the lead at 11-5. There were some signs of a fight back from Abela but Cassar remained strong and continued to extend his lead a little further to 17-10 and eventually winning the 2nd set 21-13 and taking this final to a 3rd end. The final set started with Matthew taking a small 3-0 lead, a mixture of both winning points and some errors from both players that left a 2 point gap before Abela pulled away a little further to 4 points at 8-4 and then 11-7 at the change of ends. The 4 point lead continued to be a problem for Cassar as it stayed that way to 13-9 before Abela moved closer to the win pulling further away to 17-10 after the longest rally of the whole match of 27 shots, Sam pulled together a few points at an attempt of a revival but the task was just too much in this final set. Matthew Abela took the 3rd set 21-13. 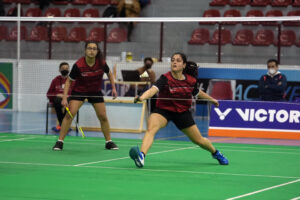 face Lauren and Sarah Azzopardi. It was Francesca and Michaela that started the strongest working well as a pair to see an 11-5 lead at the interval. After the break it was the sisters that really started to fight back bringing the game back to 16 all, from here a few unforced errors and some good set up play from them continued their drive to take the first set 21-18. The second set began point for point with some strong net play from Lauren while some strong defensive work from Ellul and Clark kept the game close at 6 all, one or two quick points saw Clark & Ellul pull slightly ahead and take an 11-8 lead into the break. They continued their dominance to pull further ahead with 5 points in a row to 16-8 before the Azzopardi’s pulled 4 straight points back with no reply 16-12.  Ellul & Clark pulled away again to take the 2nd set 21-16 and take it to a decisive 3rd set. They started the 3rd as they finished the second running to a 4-1 lead, again pegged back to 5-4 before pushing ahead and staying in front until the sisters managed to get back to tie the game 10-all. Ellul & Clark took the final point before the break to lead 11-10 at the change of ends. This pattern of play continued with Francesca & Michaela pulling away a point or two before being pulled back to 15-all, this is where they really put their foot on the gas with 5 points in a row to 20-15 and then taking the vital winning point 21-16. 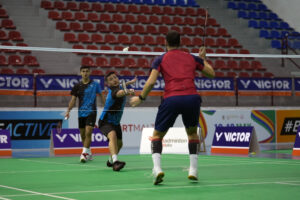 The penultimate final is the Men’s Doubles where 1st seeds Mark Abela & Samel Cassar take on the unseeded Samual Cali & Emerson Brundyn. It was the first seeds that started the strongest working themselves a 5-2 lead they managed to keep hold of the lead for a few points before Cali & Brundyn fought back to 8 all and then pushed further to an 11-9 break at the interval. After the break just small runs of points was all either pairing could put together to 15-all. Cassar increased a little pressure at the net that paid off as they extended their lead to take the first set 21-17. The second game started as a tense affair with either pairing only able to gain 1 point at a time. until 5 all where the first seeds managed a decisive 4 point run and held the lead at the break 11-7. Abela & Cassar continued to build a better scoreline after the break with a few mistakes coming from the Cali & Brundyn pairing to leave the score 16-9 in favour of the 1st seeds. From here they continued to build some good rallies setting up each other for easy kills at the net to take the win and men’s doubles title 21-12.

The last final of the day is the Mixed Doubles where 2021 winners Sam Cassar & Francesca Clark take on 4th seeds Nigel Degaetano and Lauren Azzopardi. The match started fast with both pairings wanting to secure the last title of the day, neither pairing allowing the other out of sight as neither could pull away on the scoreboard, the break saw Cassar & Clark 11-10 up by the solitary point. After the interval the pairings continued on the same point for point exchanges until a decisive break by Cassar & Clark saw them put together a run of points to win the first set 21-15. The second set started as the first until Cassar showed some great control of the shuttle that helped them pull their opponents out of position and gain a run of points to develop a strong 11-3 lead at the break. Nigel & Lauren started their fight back managing to build 4 points with only 1 in reply to close the gap, the spirited comeback continued as they slowly closed the gap to just 4 points. The 4th seeds never gave up and continued to fight for each and every points with their opponents just managing single points in reply, eventually the lead build up at the start of the game proved to be just a little too much of an uphill battle with Cassar & Clark managing to crawl over the line and take the mixed doubles title 21-18.

That is the end of another National Championships for Badminton in Malta.

Francesca Clark the stand out performer of the day repeating her triple crown winning achievements of 2021 winning yet again the Women’s Singles, Doubles and Mixed titles. Samuel Cassar came away with the same results of winning the Mens and Mixed doubles and runner up in the Singles while Matthew Abela retained his Men’s Singles title for the seventh successive year. Mark Abela retains his Men’s doubles title while Michaela Ellul gains her first senior title in the Women’s Doubles.

Congratulations to all the competitors that took part across all five events and 4 days in making this a great finals of 2022. A huge thankyou to all those who worked to organise and prepare for such a great well run championships.